Business Rules and why they are needed?
Business rules have been a very familiar term not only in the insurance, banking and retail sectors but the public sector as well. Change is inevitable in any organization’s business. What drives them apart is how quickly one can adapt to change. But this is what everyone talks about - change and adapting to change. Where do business rules fit in here?

The prime and most robust solution to implement business rules is IBM’s Websphere ILOG JRules. The entire rule management solution is known as a BRMS (Business Rules Management System). In this article, we will look at the latest IBM offering – WODM (which is ILOG v7.5). Before diving into WODM, let us look at ILOG JRules and what your organization needs in order to implement ILOG JRules.

Exploring ILOG JRules
ILOG comes from two French words – “Intelligence” and “Logiciel” meaning intelligent software. When business rules are implemented in ILOG, they tend to act as intelligent systems which can give you an answer based on relevant information that you provide, hence the name.

Before moving on to a rules-based solution I recommend asking the stakeholders in your organization the following:
If the answer to any of the above was yes, then ILOG JRules is the way to go.

An ILOG BRMS gives your organization the capability to put all your business rules in one place. This is called a rules repository. Not only are these rules separate from your application code but also independent of any change that occurs in your application code across the enterprise. Apart from being independent, rules in ILOG can be changed by the business without IT collaboration. Managers can monitor changed rules and for the first time business logic becomes transparent as opposed to embedded deep somewhere in that ugly thing called code.

In order to make a recommendation to your organization, you need to get a background of what would need to be done in order to implement ILOG’s BRMS (business rule management system). Let’s look at what components ILOG JRules consist of.

Components of ILOG JRules
WebSphere ILOG JRules has three different components. These are:
Apart from the above, there are testing tools that might be needed; these include Decision Validation Services or Rule Scenario Manager (in the older version of ILOG JRules).

Since ILOG JRules is now being replaced by WODM we will now shift our focus on WODM (version 7.5)

WODM (WebSphere Operational Decision Management) – What, Why and How?
In an effort to package and market ILOG JRules as a more robust solution for entire decision management, IBM renamed ILOG JRules to WODM recently. This is ILOG’s 7.5 version. WODM gives your business the enhanced capability to integrate business events with business rules.

Before exploring further, let’s look at how one can distinguish between a business event and a business rule. A business event is something that occurs such as ‘a claim’ or ‘a transaction’ or ‘an alarm’. It’s the trigger that causes business rules to get invoked. An event does not care about the “logic” that goes with a business policy or change, rather it acts as a signal to invoke rules and generate a response based on the business rule.

Based on the above we can safely say that WODM does not really change the way ILOG has been as far as implementing a BRMS is concerned. It provides integration with business events but when it comes to what needs to be done to implement rules and a BRMS, there are hardly any surprises. Bottomline – if you are familiar or comfortable with ILOG JRules, you don’t need to worry about any learning curve in transitioning to WODM.

Since a picture is worth a thousand words, let’s look at one shall we? 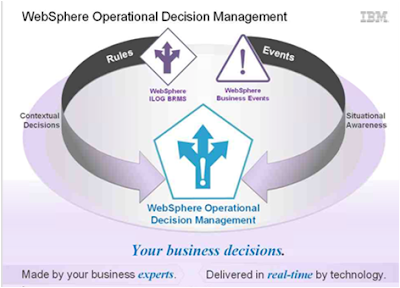 The above picture represents a high-level view of WODM. The entire arrow on the left represents rules, and in parenthesis you can see “WebSphere ILOG BRMS.” The right hand side of the picture includes WebSphere Business Events.

Exploring WODM
In order to improve the quality of repeatable transactions and process-related decisions, a combined business rules and business events platform is needed. WODM provides this solution. It enables stakeholders within any line of business to create decision logic, separate decisions from processes and applications and execute real time decisions based on various interactions. 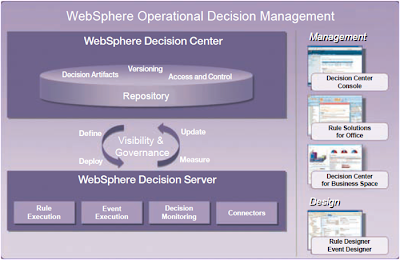 From the figure above, there are two specific components that need mention – Decision Center and Decision Server. Let’s look at what these are and how they differ from ILOG’s previous versions.

And, that is it. The way business rules were designed previously in ILOG does not change. Instead of using Rule Studio eclipse, now the enhanced Rule Designer is used. Decision Center for business space offers the capability to change namespaces out of the box and view enhanced reports for business rules and events.

Having discussed what WODM (and ILOG) is and what it consists of, let me now propose a delivery structure that gives you an idea of how your organization can implement a BRMS.

Proposed Delivery Suggestion for WODM
In order to establish a new BRMS system, there has to be detailed steps involved with Installation, Testing and Integration of the BRMS with application server environment. A new BRMS delivery approach should be broken down in four phases:
The above breakdown of phases in which a WODM-ILOG based solution is delivered ensures that the rule solution has first been integrated within the SOA enterprise before the rules are exposed for being edited by the business. This breakdown also ensures if any leaks and gaps are present they get detected in the first three phases rather than breaking the system and causing damages on production when business users make a change on the fly. The above breakdown also takes into consideration the learning curve associated with making business users comfortable with changing business rules.

Transitioning from ILOG to WODM is an easy process and all your organization needs to do is get the latest software from IBM and follow the four step process above. Learning curve is almost zero if your organization is already using ILOG.

Conclusion
Business rules in general drive your organization towards becoming highly agile and flexible to change. Implementing a BRMS in your organization gives you an edge over your competitors in today’s world of quick adaptability. Automated decision making capabilities reduce cost and overhead for your organization. IBM’s WebSphere Operational Decision Management is the most robust solution to achieve your organization’s goals of having transparent and improved quality of transactions and process related decisions.

Akshat Srivastava is an ILOG consultant at Prolifics with 5 years experience in the IT industry having worked in insurance, banking, retail and public sector companies. He is experienced in all aspects of the development life cycle, including bottom-up estimates, analysis, design, development, testing, release management, and bug-fixing. He has created rule based solutions at various clients, authored rule repositories and best practice documents while focusing on ILOG as the implementation environment.
Posted by Craig Brockman at 1:29 PM