For those of us who work with IBM products, we all know the power of the Information Center, or better known as the Info Center. At a client in lovely Tampa, Florida, myself and Infrastructure Practice Director, AJ Aronoff, were tasked with installing WebSphere MQ v7 and WebSphere MQ File Transfer Edition v7.0.2 onto a SUSE Enterprise Linux v11 system.

Now for those who have not installed WebSphere MQ on Linux and Unix systems, certain kernel parameters pertaining to semaphores and shared memory must be set above a certain minimal level. If these are not set, MQ may not operate correctly, which on a production system, only spells disaster. The WebSphere MQ Info Center has a “Quick Beginnings for Linux” section, which walks users through pre-installation tasks that need to be completed. Naturally, there is a section about setting the kernel parameters.

This section tells users to run the command “ipcs –l”, which displays the kernel parameters and their current settings, and provides an example of the minimal settings that MQ Server requires. The “ipcs –l” command will display the parameters in the format shown below: 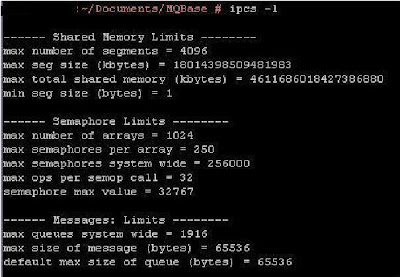 One would think this format would allow an admin to check the parameter settings that MQ requires, make the changes, and move onto the install. The problem is that the Info Center page doesn’t provide this format. It provides the requirement like so:

Now examining these two formats for long enough, you can determine some of the possible correlations. But others, such as the kernel.sem setting, can be interpreted in many ways, as some of the values could be set for multiple parameters. Research provides more hints about the other settings, such as their short name, but no solid evidence for the kernel.sem parameter. There is, however, an IBM support page devoted purely to this little problem, but also doesn’t provide a concrete translation of the kernel.sem parameter. This page would probably be ignored by an amateur user, as the title states “Unix IPC resources” instead of ‘kernel parameters’ and ‘Linux’, but by looking back at the “Quick Beginnings” page, one notices the first sentence reads “System V IPC resources”. IBM hid our now not-so-secret script, mqconfig, on this page, as long as you don’t scroll right past it. The script reads kernel and software information about the system you are running it on, compares them to the IBM standards for MQ, and prints out if the system passes or fails each of the necessary parameters.

Once the failed settings have been changed, by copying the proper settings into the sysctl.conf file, and the script is run again, the output looks like this:

So for those of you other than AJ and myself who will be installing MQ on Linux or Unix, save yourself some time and a headache, and use this handy script. It can be found here: http://www-01.ibm.com/support/docview.wss?rs=171&context=SSFKSJ&dc=DB520&dc=DB560&uid=swg21271236&loc=en_US&cs=UTF-8&lang=en&rss=ct171websphere

Patrick Brady is a Consultant at Prolifics based out of New York City. He has 3 years of consulting experience based around the WebSphere family of products, focusing on the administration side of customer implementations. He specializes in High Availability solutions for WebSphere MQ and Message Broker.
Posted by Craig Brockman at 9:33 AM